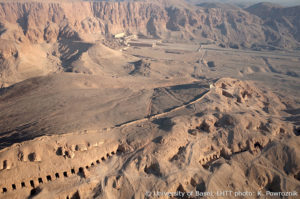 Sheikh ‘Abd el-Qurna is a prominent foothill of the Theban Western mountains, named after the tomb of a local sheikh on top of it. The cluster of rock tombs investigated in this project were built into this hillside: the complex TT95A – 95B – 95C and tomb K85[1] on its east slope, tombs K453, TT84, K90, and K555 on its south-east slope, within three elevation zones of the hillside. The tombs were reachable in ancient times on cemetery paths and staircases, most of which lie under heaps of debris nowadays. They consist of sunk-in courtyards, used as open stages for funerary procedures, rock-cut ceremonial halls (funerary chapels) and burial systems, usually accessible from the courtyards.

Apart from two tombs that have been cut during the early Middle Bronze Age (Middle Kingdom), the structures date back to the second half of the 15th century BC (New Kingdom). They have been reused subsequently for burials or domestic purposes over a very long time, from the 2nd millennium BC until recent times. Of equal length is their history of looting. 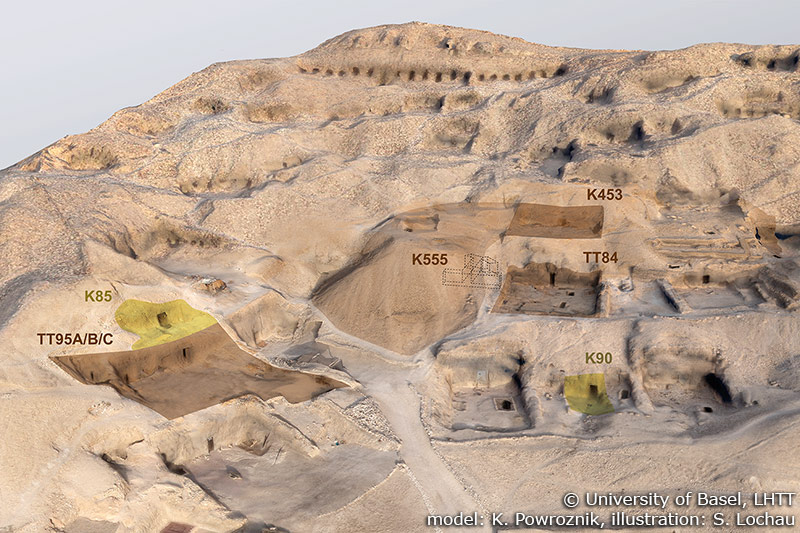 Among the tombs studied in this project, there is one cluster grouped around TT84 on the south-east slope of the hill and consisting of tombs K555, K453, and K90 (in clockwise direction): K555 is the southernmost of these tombs and was erected on a slightly deeper level than TT84, but on the same cemetery terrace. Today, it lies buried under a huge debris cone and is only accessible through a breakthrough in TT84. On the same terrace, the next monumental tomb northeast of  TT84 is TT85, built during the 15th century BC. These tombs are separated from each other by a construction area (now classified as AU6000) dating to the same period.[2] K453, a smaller-scale tomb, lies right above TT84, while K90, a corridor tomb, is situated on the next lower hillside terrace. The latter is surrounded by the small New Kingdom tombs K89 and K91, while the main structures beside K90 on this level are TT99 (cf. TT99 Project) and TT97, constructed during the middle 18th dynasty. All these tombs interrelated with TT84 at some point in time. 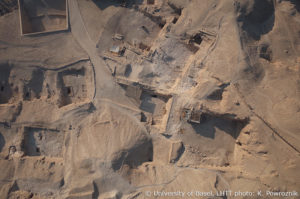 TT95 is located on the east slope of the hillside, opposite of K555 and TT84, on a slightly deeper level. It forms a large complex with substructures 95B and 95C, built in the south of the funerary chapel proper, and with corridor tomb K85 above it. When tomb construction sites were planned in the 15th century BC in this location, this hillside slope was unspoiled except for two Middle Kingdom tombs, now on top of (K85) and beside (K94) TT95. Simultaneous construction projects surrounding TT95 were the tomb of Sennefer, TT96 in the north, and TT29, the tomb of Imenemipet, on a lower level and situated further south (cf. Mission archéologique dans la Nécropole thébaine [MANT]).