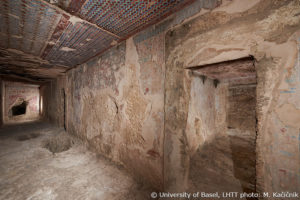 In TT84, stone-cutting and plastering procedures were fully completed; inside the tomb, the architects and stonemasons were able over time to create an almost perfect symmetrical geometry of its rooms, which were cut or remodeled to measure, where bad rock mass quality afforded restoration and plastering. Particular care was given to the doorways of the tomb chapel, as each of them has been equipped with a step or threshold and pronounced door frames, cut from the bedrock or remodeled in mortar. Added to the tomb-chapel’s T-shaped ground plan and in line with its central axis was a small room at the west[1] end of the tomb chapel, displaying a central statue niche in its back wall as well as a vaulted ceiling. The transverse entrance hall was expanded by two symmetrically carved small side-chapels to be entered from a door in the north and the south of the back wall, each provided with a central false door niche (these architectural elements are not preserved).

South wall of the corridor

The 18th Dynasty tomb decoration, reflecting an early change of ownership (cf. The 18th Dynasty Tombs), was almost completed, but has substantially suffered from later reuse and repeated cleaning by early modern epigraphers, in particular in the chapels. Today, the color scheme appears as if it was lacking yellow or ochre pigment in many places. It is currently under investigation whether this distinct feature is intentional, related to specific painting practices, or to color changes over time.

Only the inner walls of the entrance doorway and the outer door jambs were carved in raised or sunken relief. The door lintel, a separately manufactured block, is now missing. 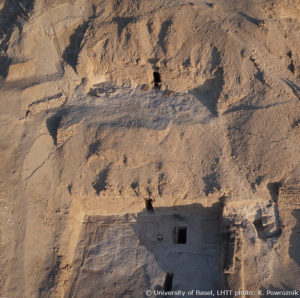 Both the floor of the interior halls and of the open forecourt were nicely cut and covered with a floor screed, now almost completely lost. The slanting rock-cut sidewalls of the forecourt were complemented and extended by enclosure walls built from quarry stone. A low square-shaped platform, slightly slanting towards the south, was carved from the massive limestone in front of the façade, close to the tomb entrance, and may have served mortuary practices during funerals. The scarped façade had once been heightened by a sturdy stone-built wall and a mudbrick structure above the tomb entrance, surmounted by a construction of terracotta bricks, forming a cavetto and torus molding (photo tiles), and rows of stamped terracotta cones. 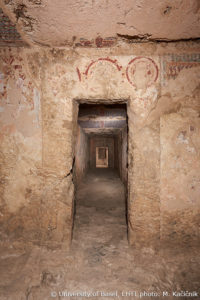 In the north-west corner of the forecourt, a deep rectangular shaft was built, cutting into the unfinished chapel of tomb K90. A north-south oriented mudbrick wall was added at the east end of the courtyard to mark off the area at a time still to be determined. Certainly of later date is a rectangular pit in the east part of the forecourt as well as the irregular subterranean chamber in the entrance hall. Related to the Coptic Period (Late-Roman) is a mudbrick structure built on the north enclosure wall, probably for domestic use. During one of the Coptic occupation phases, the courtyard and the inner entrance area of TT84 served as places of textile production (remains of two loom pits in transverse hall preserved). There were also times during the Late-Roman Period when many of the Pharaonic wall paintings were resurfaced, polychrome ornamental designs were painted around the main doorways of the transverse hall, and dipinti were left on some walls. The construction and use phases of TT84 are still under investigation.

[1] Here and in the following, ideal cardinal directions are given.