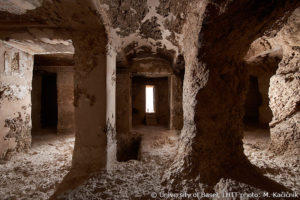 View along the tomb axis towards the tomb’s entrance

TT95 is one of the 5 tombs that have been built on the southern extension of the hillside of Sheikh ‘Abd el-Qurna, facing east. It was designed as an ambitious burial site subdivided into four architectural units and reflects various stages of construction: the rock-cut funerary chapel reaches as far as 19 m into the hillside (95A) and comprises a spacious transverse hall (17.50 m x 8.30 m) with high ceilings, supported by twelve pillars, and an interior large 4-pillared hall, only roughly shaped out of the rock mass. The central axis, intersecting both halls, was conceived as a colonnade: it is flanked by pillars on both sides from the entrance of the tomb to its innermost part and resembles the central processional way of a New Kingdom temple, leading through columned or pillared halls. 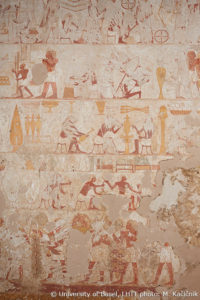 Scene showing the workshop in the Amun temple

The north part of the transverse hall has been fully decorated except for the north wall, where a recess was cut, probably for a separately carved stela, the west wall, which was only partly covered with preliminary drawings of a royal audience, and for one pillar cut in poor quality rock mass. In contrast, paintings were only executed in the east aisle of the south part of the entrance hall; all other parts of the interior halls were devoid of any decoration and reflect different stages of stone masonry. The tomb entrance was already adorned with door jambs bearing carved and painted inscriptions, although stone-cutters were still at work inside the funerary chapel.

The unfinished courtyard, reflecting two construction phases, was partly cut from the rock mass, partly filled up and terraced with excavation debris. It gives access to the funerary chapel as well as to substructure 95B, for which a doorway was cut into the south end of the façade. A rectangular mudbrick enclosure surrounded the forecourt in the north and in the east, while a slanting rock flank, still in place, defined its limit in the south-west, and also became the north wall of the courtyard in front of substructure 95C, when this open area was cut. 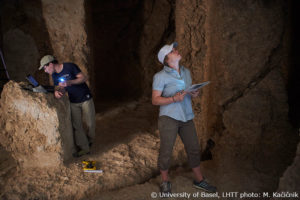 According to the current state of research, the construction site was abandoned when a pillar and part of the roof of the entrance hall collapsed, exposing it to the elements. Geological analysis shows that persistent and steep fractures dissecting the rock mass above the collapsed pillar enabled gravitational block failures in the roof. It will be investigated in the future if other triggering factors were involved in the long-term weakening of the rock mass and the collapse. 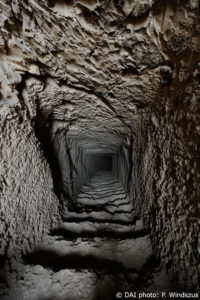 During its construction phase, TT95 was extended by two individually accessible, monumental walk-in substructures: 95B and 95C. 95B, consisting of two separate burial systems departing from an anteroom – a long curved descending staircase leading to a well-carved coffin chamber and a corridor sepulchre accessible through a short shaft – once contained burials of the High-Priest’s nuclear family. In contrast, substructure 95C has been left unfinished. Its position and conceptual affinity with 95B suggests that it was also part of Mery’s building project. From a small open courtyard, deeply sunk into the bedrock, a large unmarked entrance in the west gives way into a long, stepped sloping passage, which, by changing its direction twice, covers an altitude of about 16 m. It ends in a stonemasons’ gallery, which was apparently used for a burial later during the New Kingdom. Structural additions of the first millennium BC were a shaft tomb in front of this gallery, two burial chambers and an alcove in the sloping passage, as well as two shaftrooms which were cut into the south flank. 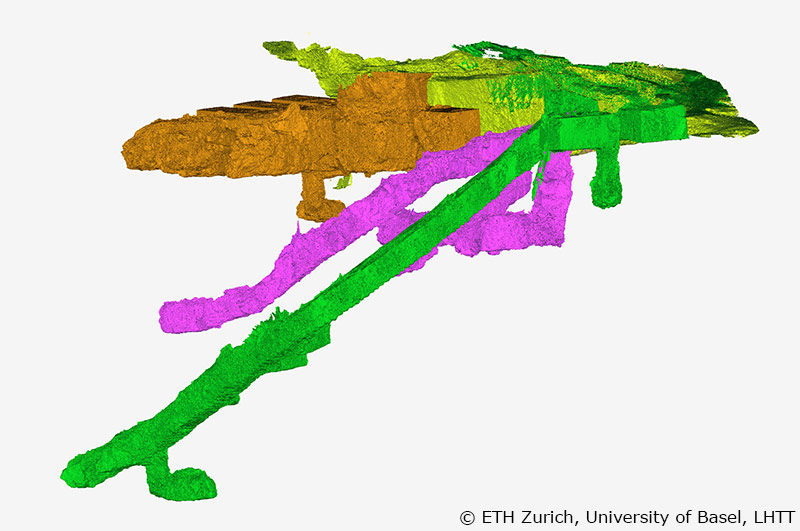 3D laser scan model of TT95, showing substructures 95B (pink), 95C (dark green), and the funerary chapel 95A with its shaft tomb (brown)

Both 95B and 95C were repeatedly reused for interments, in particular during the Third Intermediate and the Late Period (10th-4th century BC), but also for domestic purposes in Late Roman and recent times. The badly looted remains of a Third Intermediate Period burial assemblage recovered from a small shaft tomb in the entrance hall of TT95(A) revealed one of the oldest in situ prosthesis of a limb, which was found still attached to the right foot of a female mummy (cf. Burial & Domestic Archaeology). Material and scientific analyses of the remains of these burial groups are currently conducted.