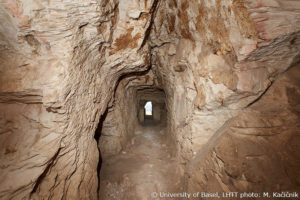 View through the corridor towards the entrance

K453 lies right above TT84, south-facing, and belonged to the same tomb-owner, Iamunedjeh, according to stamped terracotta cones once crowning the top of the façade. Since the inscriptions of the stamps mention titles corresponding to an intermediary stage of the tomb-owner’s career, K453 can be identified as Iamunedjeh’s earlier building project. The interior of the middle-sized unfinished tomb chapel consists of a transverse hall and a corridor along its middle axis, to which an inner transverse hall was added.

The grade of completion decreases from the entrance of the tomb towards its back: the outer transverse hall was fitted with a vaulted ceiling that adapted well to the poor quality of the rock layer, into which parts of the ceiling had been cut; overbreaks and cracks were padded with mortar and stone flakes and plastered over with a thick coat of mortar. At least in the east part of the hall on the ceiling, polychrome paintings were already executed. In the north east corner of the hall, the entrance and the beginning of a descending passage were roughly cut. A square-shaped shaft from a later use phase lies at the west end of the hall.

The corridor had already reached its rough dimensions, when construction work came to a halt; of the inner hall, only the east part was roughly shaped, while cutting its west side had just started. The rough gallery cut from the east face of the corridor was used as a long burial chamber during the 1st millennium BC; it may be related to the mudbrick structures in front of the tomb entrance and the façade, consisting of two mudbrick door jambs, a threshold with the lower part of a wooden door still in situ when excavated, and two low, square-shaped platforms in front of the façade, flanking the entrance. 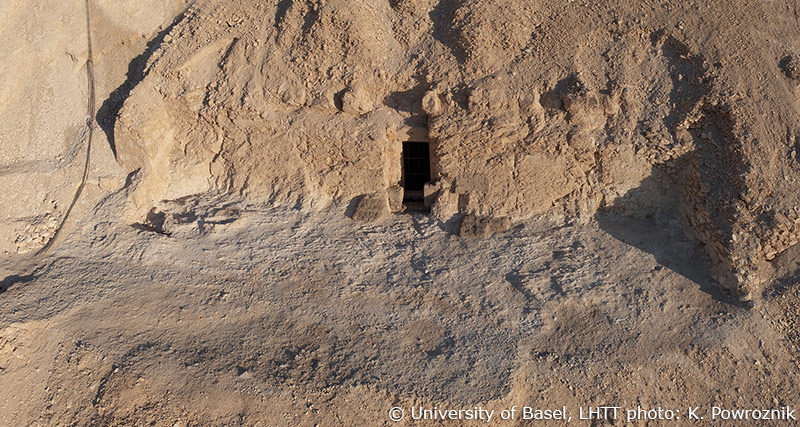 Forecourt and façade of K453

Except for the north-west part of the façade and the forecourt, which were only roughly carved, the exterior structures of the tomb seem to have been finished: in those parts where the floor was cut from the bedrock, its surface has been covered with a gypsum mortar screed. This screed was reinforced with small flakes of flint nodules where it covered the ancient excavation debris filling. Not much has survived from the stone-built façade wall. Its side extension walls seem to have enclosed not only K453, but also TT84 below, and must, therefore, have been erected at the time TT84 was built. Both structures also share the same central axis, which emphasizes the tombs’ nature as a single funerary complex. Its construction history is currently investigated.