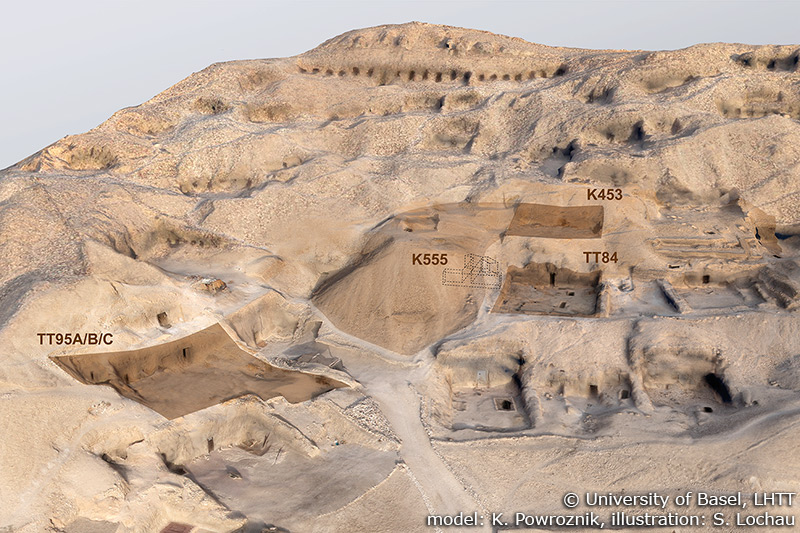 The main tombs studied in this project – TT84, TT95, K453 and K555 – were built about five hundred years after the Middle Kingdom tombs, during the middle 18th Dynasty. At this time, the south-east and east hill slopes of Sheikh ‘Abd el-Qurna became the preferred location for elite tomb building outside of the Kings’ Valley. Two of the three tomb complexes under investigation, TT95 and K555, were built for members of the king’s milk kinship including royal tutors. They share this important feature with most of the rock-cut tombs in this part of the 18th Dynasty necropolis (counterclockwise: TT29, TT96, TT93, and TT98 on the east slope and TT99 and TT85 on the south-east slope), and possibly also TTC3, cf. http://topbib.griffith.ox.ac.uk//dtb.html?topbib=0). It has been suggested that the prime locations of the south-east and the east slopes of Sheikh ‘Abd el-Qurna were developed into a planned cemetery during the reigns of Thutmose III and Amenhotep II, about 1450-1400 BC. In TT29, a lot of building records (inscribed limestone flakes, so-called ostraca, in hieratic script), referring to construction work in TT95, were uncovered by the Belgian Mission in TT29, and will be published soon.

TT84 and TT95 are located on the middle ranges of the south-east and east hillside slopes of Sheikh ‘Abd el-Qurna, facing each other. Both tombs have a long history of use in antiquity, covering a time span of over 2000 years (from the 18th Dynasty to the Late-Roman Period). At some point during the middle 18th Dynasty, they shared ownership: TT84, known as the tomb chapel of Iamunedjeh, First Royal Herald and Overseer of the State Granaries, was built late in the reign of Thutmose III; TT95, the funerary chapel of Mery, High-Priest of Amun, was under construction about one generation later, during the last third of the reign of Amenhotep II. It is very likely that work in TT95(A) was involuntarily stopped due to a huge rock failure in the tomb’s entrance hall. Its owner, deprived of an appropriate location for commemorative and mortuary activities to his own and the benefit of his family, managed to appropriate TT84 and change the painted signatures of the former tomb-holder on walls and ceilings into his own, carefully adjusting his alterations to the existing painting colour and sign schemes. (cf. Analysis of Tomb Decoration)